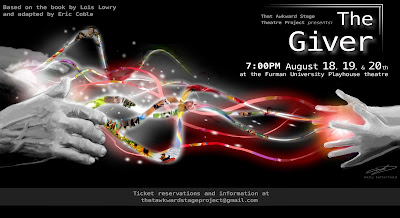 Instead of Uncle Sam, it MJ Slide and and Katie Payne need YOUR help. I'm currently seeking out local businesses and inviduals who might be interested in sponsoring a stage play I'm producing. The Giver, a stage adaptation of Lois Lowry's Newberry Award winning book and adapted by Eric Coble will be presented at the Furman Playhouse Theatre August 18th, 19th, and 20th, directed, produced and performed by an ENTIRE teen cast.
The cast and crew have banded together to cover a lot of the expenses out of pocket including royalites to use the script, funds to cover cover set construction, costuming, and promotional materials but we could seriously use your help to cut some of the heavy expenses in half.
Both this project and its Director Katie Payne I truly believe in, the story alone deserves your attention and I believe its a great way to unite the arts community around a group of young people who are defining the norm that medocity is ok and stepping above and beyond and making something that can and will have an postive impact. If interested in becoming a sponsor of the project I will send you the various information needed to complete the sponsorship. In return for the different level of funds we can offer advert space for your local business or charity of your choice in our playbill as well as promient advertising space on our official Facebook page and twitter stream. Basically its a crowdfunding campaign without kickstarter or indigiegogo as a platform.
All the information for the production company on FB "That Awkward Stage Theatre Project" can be found here!  http://www.facebook.com/ThatAwkwardStageProject)
And THE GIVER official event page: http://www.facebook.com/event.php?eid=134272379991995
Spread the word about the project and how people can get involved. Lets rock this folks! This is a joint effort, bringing the arts together on a level that can really make a difference.  Feel free to contact me directly at mj@magnoliahideout.com and I can fill you in on all the details.
Every $$ counts and affords a production that is clearly going to make some waves further its reach and impact our local theatre and audience for many years to come. Will you join us?
MJ Slide
Producer
Posted by MJ Slide at 4:29 PM 8 comments:

In which i write stuff about filmmaking at 2 in the morning.

Bit of a micro blog or sorts to get off my chest and off my mind but hopefully its sentiments will ring true with my fellow filmmakers.
Some people sell insurance, others are florists, run ice cream businesses or raise families. I make movies. Its what I do. I literally cannot see myself doing anything else, or even half as well and with that amount of passion. I just came off a teaser trailer shoot yesterday and I'm on still on this high. My brain won't function properly, it keeps rehashing, learning from what I did right and what i could do better and most of all, i feel amped up, itching to get back on set again. This sense of longing, returning to the hustle and bustle, the constant intake, processing ,and bringing of ideas to life in the form of collaboration between mind, camera, and actor. There is seriously nothing like filmmaking. I brought on half a dozen extras who has never stepped foot onto a film set before. Noted we were shooting gureilla but they just went with the flow with these fantastic grins on their faces. They got bossed around, drank pop and ate crafty, played fake chess, watched other total strangers make out for the camera, run around in a crowd with a girl who looked like she just got the crap beaten out of her and you know what they said? That it was pretty much the coolest experience they had had in a long time and they couldn't wait to do it again.
I tell ya, its like a frakking drug. Once you're hooked you just can't let go. To bring those many different types of people together, with all their imput, perspective, and creative ability that they willingly infuse into a project happens rarely and when it does it tops the certfied "Made of Awesome" list.  I'm gushing I know but I'm hoping my brain will let me sleep once I get this all out.
So many people have asked why I've taken on a feature length film. Deep down it might be for an extremely selfish reason but basically I want to work on a story i love and care about and so does everyone else whose a part of the team and get to work on that story with those characters and those awesome peeps as long as I possibly can.  The world needs the florists, the homemakers, the insurance sales reps, and the world needs filmmaking. I know I do.
Posted by MJ Slide at 10:54 PM 1 comment: